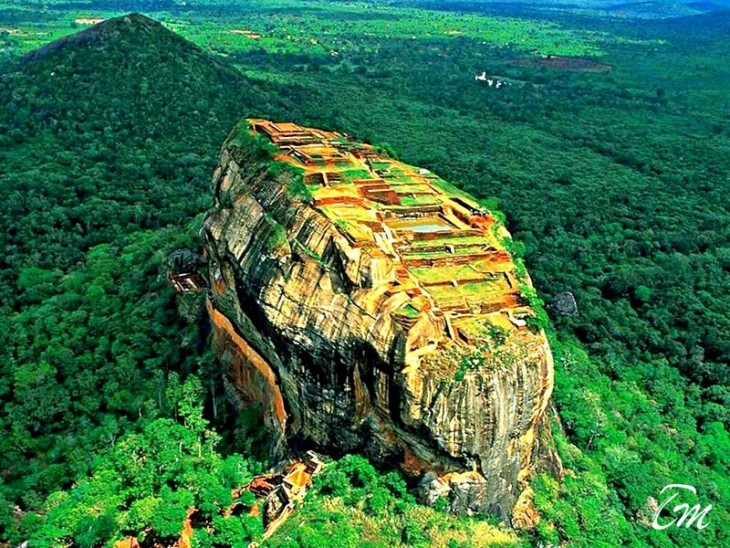 One of the most outstanding tourist attractions in Sri Lanka! Sigiriya is an incredible construction of an ancient fortress on the top of a rocky escarpment that overlooks the stupendous amount of vegetation. A Sri Lankan holiday is incomplete without paying the due visit to Sigiriya which shall include a natural sightseeing, peeping into the antiquity, and taking a stunning hike. You can't help but admire the existence, architectural brilliance of Sigiriya Fort, and fall for the charming views you are going to behold from its summit. Listed as UNESCO World Heritage Site, Sigiriya epitomizes ancient urban planning.

Sigiriya is a rock plateau of 200 meters height formed from magma of an extinct volcano overlooking the surrounding lush jungles surrounding perched 370 meters above the sea level. The Sigiriya fortress with its marvelous structures tells of the advanced ancient architectural and engineering skills involved. Atop the plateau, the views are astonishing for your eyes when it is cast over the charming dream-like natural vegetation. The main entrance up to the rock is located on the northern side where it was designed in the form of a colossal stone lion. The rock earned its name, Sigiriya, from its entrance image. The term Sigiriya comes from a Sinhalese word Sihagri meaning Lion Rock.

Legendary past: Over 50 centuries ago, Sigiriya is supposed to have been built by Kuvera who was half brother to Ravana, the antihero in the epic, Ramayana. It is said that Maya Danava was its chief architect. who went on with the work instructed by King Visthavasa, the father of Ravana. In the past, Sigiriya came to be called under several names like Alakamandava and Cithranakuta. Sigiriya was the kingdom of the monarchy until it was moved to Kelaniya after the death of Ravana.

Historical past: Regions of Sigiriya has human inhabitation even from prehistoric times. There have been found sheltering rocks and caves that lend strong credence to the fact that monks lived here as back as the 3rd century BC. In 477 AD, Kashyapa I seized the throne from King Dhatusena through a coup. Moggallana, who was the rightful heir to the throne fled the country. In order to evade any threat from Moggallana, Kashyapa shifted the capital from Anuradhapura to Sigiriya. It was during his King Kashyapa’s reign that span from 477 to 495 AD, Sigiriya was turned into such a complex urbanized existence.

Climbing up Sigiriya is less of a hassle since it has a systematic flight of concrete stairs to leed you up. It can be interesting, far from being tedious when you proceed relishing those beautiful frescoes and graffiti. The ascent includes nearly 1200 steps and ascent and descent only require just under two hours. Midway there are flat areas where you can rest catching your breath. It won't be dangerous nut only that you need to be physically fit. The senior citizens can consider going up if they feel okay since there are places to rest midway up. Or you can have them sit in a nearby restaurant until you come back down. Since it is not a religious place, you can go easy with your outfit. Remember, Sigiriya is only available for climbing from 7 am in the morning to 5 in the pm.

Sigiriya Rock Fortress is located in the Matale District in the Central Province of Sri Lanka. It is perched in the cultural triangle formed by Kandy, Anuradhapura, and Polonnaruwa and Kandy. It is one of the eight world heritage sites in Sri Lanka and the cultural triangle Sigiriya belongs to has a total of five of them. The nearest city to Sigiriya is Dambulla around 25 km away, where accommodation and restaurants are in a convenient availability. You can catch the bus or hire a tuk-tuk to Sigiriya from Dambulla. From other major cities like Jaffna, Trincomalee, and Kandy, you can get buses to Sigiriya.

The sensual wonders of Sigiriya start even before you go up. While you walk along the avenue over to the Lion Rock, you shall be greeted by some nice pools and terraces which are the remains of what was once a beautifully landscaped garden. Ahead of the path, you shall find the "eighth world wonder", the two-hundred-meter high granite rock fortress. The fortress complex features remnants of a ruined ancient palace coupled with an elaborate structure of fortifications, water system, fountains, and gardens.

Eighteen Frescos that survived to date from plenty existing during the reign of Kasyapa adorn the western wall of Sigiriya. They are the depiction of nude females, possibly either Kasyapa’s wives and concubines or priestess performing religious rituals. Its mirror wall, another attraction high up here, is a well-polished thing in which the king looked his reflection. And the Mirror wall bears inscriptions and poems marked by the visitors of Sigiriya.

Sigiriya has water gardens, cave and boulder gardens, and also terraced gardens. They are located in the western part of the rock. The gardens here are believed to be among the oldest landscaped gardens around the globe. It is annexed to the complex hydraulic system that consists of canals, locks, lakes, dams, bridges, fountains, and surface and underground water pumps.