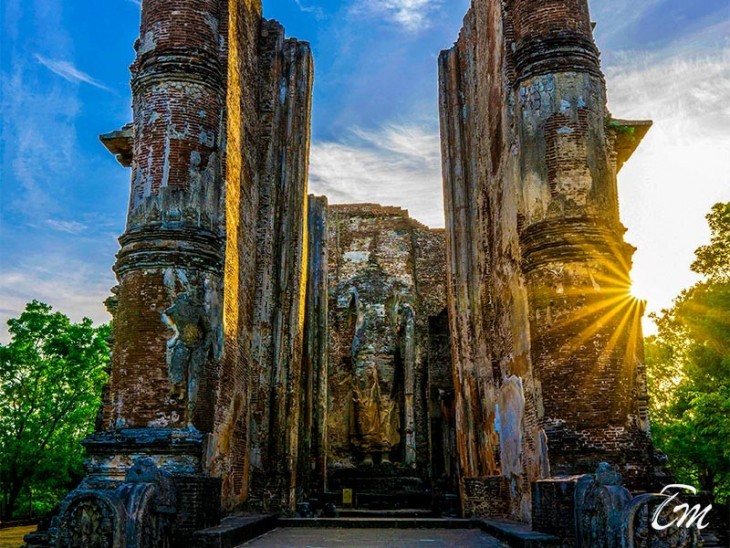 Polonnaruwa is one of the largest cities in the north-central province of Sri Lanka and is popular as the finest instance of perfectly planned archaeological relic cities in the country. The neatly kept remnants of the ancient city vouch for the discipline and remarkable architecture of its time-old rulers. The city for its amazing constructions from the past has been designated as a world heritage place in 1982. With clean and charming surroundings coupled with greenery, this ancient city of Polonnaruwa from the 10th century BC is a visual feast for anyone passionate about antiquity and ancient civilization.

Attractions & Things To See Around Polonnaruwa

The curious ruins of ancient Polonnaruwa city are preserved at Polonnaruwa Old Town. It is a precious collection of architectural wonders of what contributed to the existence of a remarkable city during the Chola kingdom. They are scattered across an extensive land that stretches 4 Kilometers from the north end to the south. The worth-seeing ruins include the Royal Palace of a millennium old, the King's Audience Hall with brilliant stone-carved walls, the Swimming Pool, the Sacred Quadrangle which is a raised-up mound bounded by stone walls, a Shiva Devale entirely made of stone, Pabaly Vehera (3rd largest Dagaba on the premises), Rankot Vihara (the largest Dagaba in Polonnaruwa and the fourth largest in the country with 54 meters height), Dagaba Kiri Vihara (a milk-white unrestored Dagaba still in good condition), Lankatilaka Viharaya with 17 meters high walls and a huge standing headless Buddha statue, four different stature Buddha figures at Gal Vihara, Thivanka Image House, and Potgul Vihara (an ancient library).

Other than antiquity, there is something more you can explore. To the west of the ancient city, there is Parakrama Samudra man-made lake looking like an inland-sea. It was constructed in the 13th century and rehabilitated in the 1950s. The Polonnaruwa Museum shall give you necessary insight into the ruins of Polonnaruwa. The Minneriya/Kaudulla National Park is just within a convenient car drive from the city.

After the fall of Anuradhapura in 993, Polonnaruwa was the second capital of Sri Lanka. It was established in the 10th century by the Cholas as a capital city under the name Jananathapuram. Raja Raja Chola 1 and Rajendra Chola 1 are some of its kings who contributed to what has now been the historical ruins. Around 1070 AD, the Chola rule came to a close when Polonnaruwa was taken over by Vijayabahu I also known as Vijayabahu the great. The invasion undertaken by Vijayabahu was a much calculated one. They kept the city under seven months of besieging followed by attacks from different parts. Considerable structures were given birth during this period as well, including the brilliant irrigation system, Parakrama Samudra, or the Sea of Parakrama.

Simply put, the best time of the year to visit Polonnaruwa is the months of July, August, and then January. Having a tropical climate with humidity levels at 80% for the most part of the year, the region has hot weather outside with a good chance of rainfall at least for 6 months in a year. Better not go for months from October through December for the chances of excess downpouring. From January through May, it is frequently sunny while May through August appears drier.

Where You Could Stay Visiting Polonnaruwa

Located in the prominent part of the country, Polonnaruwa can offer you all the necessary facilities including accommodation is plenty in diverse. You can expect more modest and village-oriented accommodation in the city with considerable amenities. Hotels and lodges erected on the banks of Giritale lake in Giritale village are one of such preferred options, around 15 Kilometers down the main road. Why not considering those Polonnaruwa's rest houses near that man-made lake that can offer you the same charm! Plus, the cities of Habarana and Dambulla are within a convenient distance from the city. There you can expect a bit more lavish housing.

How To Reach Polonnaruwa, Sri Lanka

Polonnaruwa is one of the two districts in the North Central Province of Sri Lanka which is the largest province in the country covering 16% of the total country's land wealth. The other district in the province is Anuradhapura. Polonnaruwa, perched in the so-called "cultural triangle" of the country, is located 216 Kilometers away from Colombo. It is accessible by all sorts of travel like bus, taxi, and train. It shall take you nearly 5 hours to reach in a car. From Colombo, it is A6 you need to take. From Dambulla, it is 70 Kilometers away, while from Habarana, Polonnaruwa is less than 50 Kilometers.