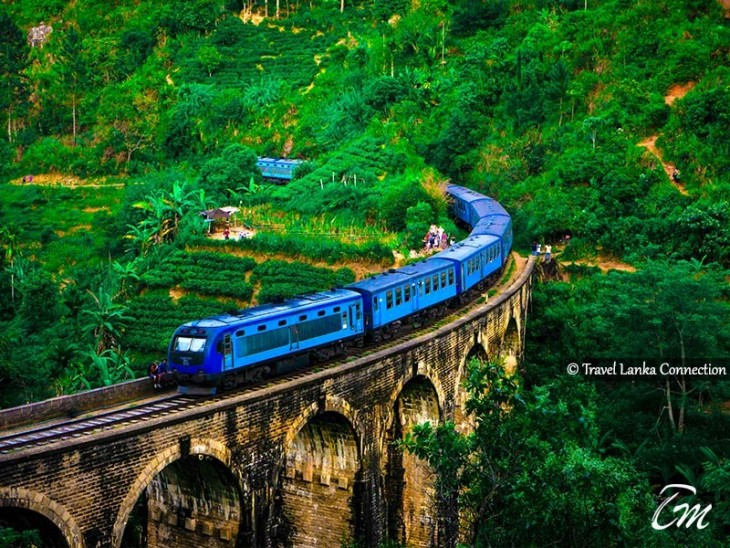 One of the worth seeing highlights in the Mountain village of Ella! The Nine Arch Bridge in Demodara near Ella is a clear-cut example of the railway construction in Sri Lanka during the British colonial era. Also called as the Bridge in the sky, it is a beautiful and unsophisticated viaduct train bridge that stretches across around 91 meters with a total of 9 spans amidst the lushly vegetated foliage on both sides. The so-called most beautiful train ride in the world, the Ella to Kandy train ride runs near the Nine Arch Bridge. The spectacle of greenery in the surroundings and the architectural wow-factors of the bridge draw large hoards of tourists here.

With a cluster of nine spans made from stones, bricks, and cement, the Nine Arch Bridge near Ella covers a length of 91.44 meters (300 ft) with a width of 7.62 meters (25 ft) at a soaring height of 24.38 meters (80 ft). It was made without a single piece of steel. A peaceful and sightseeing of 30 minutes through the scenic jungle shall take you this architectural wonder stashed amidst the slopes of green tea fields. You can walk down the bridge enjoying the beautiful blend of nice weather and stunning surroundings.

History says the Nine Arch Bridge in Ella was fulfilled in 1921. Popular hearsay about the bridge was that when the construction of the bridge started, Britain was getting into the warfare of the Second World War. She had to reallocate the steel assigned for the bridge to the battlefront projects which caused the building process to a standstill. Eventually the locals took on the work and completed it using bricks and cement; without any steel.

Speaking of funny lore, Appuhami who was a traditional devil dancer was on his way back home in costume when that British man with the job of constructing a railway in the region scared of his appearance. After the acquaintance, Appuhami helped him with the work. When the construction got hard due to the gap between the hills and the marshy land beneath, Appuhami took over and pulled on an incredible performance by furnishing the ground with hard rocks and like that; at a lot less cost and time. He even vouched for the quality by laying under the bridge while the first train went over the bridge.

Where Locate & How To Reach Nine Arch Bridge In Ella, Sri Lanka

Nine Arch Bridge, the architectural amusement coupled with scenery, is positioned between Ella and Demodara station. There are several travel options that can take you here. Take the road that goes towards Little Adam’s Peak and take a left at the small colored temple. Then follow Lake Front Cottage. You can opt for a quiet walk in between the jungle. At the parking spots after Art Cafe Umbrella, take a left into the jungle. A peaceful walk of couple minutes shall get you here. Coming from Ella town, it is more fun if you walk along the railway track. You will reach a tunnel and the bridge is just around the corner then. The easiest of all is just taking a tuk-tuk from Ella that shall drop you off just near the tunnel.