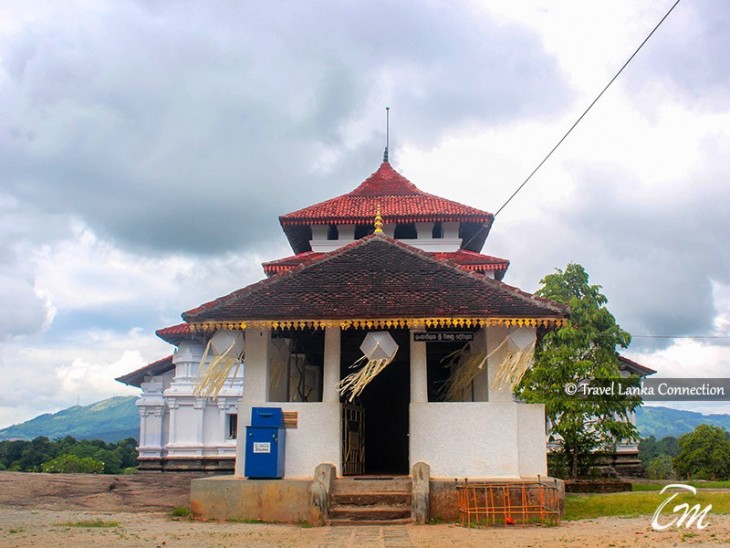 Lankatilaka Temple or Vihara is an ancient Buddhist temple built on the top of the rock called Panhalgala in the village of Rabbegamuwa, Udunuvara division of Kandy district. Regarded as the exemplified architectural edifice from the Gampola era (1341 – 1408 AD), Lankatilaka, together with another Buddhist temple at Gadaladeniya and the Embekke Devalaya forms a worth-visiting religious trio with fantastic constructional and decorative elements.

Set isolated from bustling village life, the temple area, that stands overlooking a rocky escarpment, gives you a peaceful environment and magnificent panoramic views of distant hills, pleasing vegetation and paddy fields. The hamlet where the Lankathilaka temple is located is well renowned for its traditional vocations that are part of its cultural heritage.

The temple can be accessed from two directions; one being through the Sanghawasa, at the bottom of the rock with large rice storage bins within the premises and the other being from the Western direction. The temple complex consists of the main temple building, the Dagoba (Chaithya), and the Bo tree. Near the Bodhigharaya can be seen a large stone image of Buddha's footprint. The preaching hall in the front comes under a flat-tile-thatched roof with beautiful patterns. The temple has different sections dedicated to various Hindu gods, like Vishnu and Ganapati with the Stupa built nearby on the rock surface. The three-story Buddha Image House, made with granite, features wonderful architectural designs and wall painting. There is a Moonstone or ‘Sandakadapahana’, a statue of the Seated Buddha under a Dragon Arch.

Lankatilaka Vihara Buddhist Temple was built in the 14th century by King Bhuvanekabahu IV who ruled from 1341 to 1351 AD. He consigned the task of the construction of the temple to his chief minister, Senalankadhikara. It was designed by the South Indian architect Sthapati Rayar who mixed Dravidian and Indo Chinese construction style with the Sinhalese architecture of the Polonnaruwa period. The renovation and addition have even taken place as recently as the 17th century; the second flight of stairs made in 1913 is an instance. Considered as the typical example of worshipping Buddha and God existent during the Gampola era, the place had once paid offerings to various Hindu gods as well, like Vishnu, Saman, and Ganapati.

Where Located & How to Reach Lankatilaka Temple, Kandy

Lankatilaka Temple in Kandy district is located in the village of Rabbegamuwa (or near Hiyarapitiya village). The temple premises are just 30 minutes or longer journey from the heart of Kandy. It can be reached in two directions, one via the Colombo-Kandy road and another via the Gampaha-Kandy road. Coming from Colombo in your own vehicle, stick on Colombo – Kandy A1 highway and turn right at Pilimatalawa. From there, the destination is just five Kilometers away. It is wise to get your hired tuk-tuk waiting for you since it is hard to get a return from that isolated place and to see around the place.