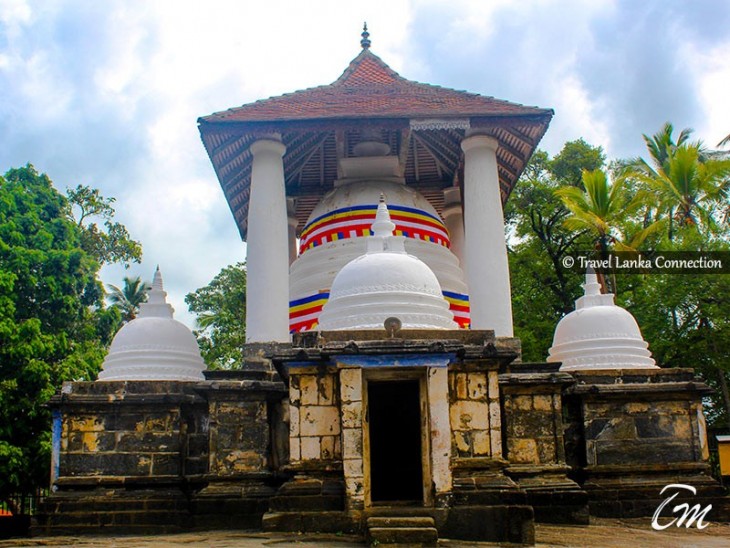 Located in Diggala in the district of Kandy, Gadaladeniya Temple in Sri Lanka is a magnificent time-old Buddhist monastery positioned over a rock. Visiting this ancient wonder shall be literally a live going back to the history of Sri Lanka only to witness the captivating Sri Lankan workmanship inspired and influenced by South Indian style. Remarkable features of the architecture and craftsmanship are visible on every nook and corner of the shrines! Gadaladeniya Temple is also known as Gadaladeniya Gramaye Viharaya or Gadaladeniya Gramaye Saddharmakirthi Vihayara.

There are primarily two shrines inside the temple. The main shrine of South Indian design made on a rocky outcrop features a seated Buddha statue framed by Dragon Arch. On both sides are standing statues of Buddhas and there are images of various deities. The secondary shrine positioned in the middle of the premises has four little wings in a cruciform with each forming small individual Buddha shrines with their own domes. Adjacent to the shrine is a Vishnu Devalay.

Two more buildings are on the premises - the Digge and Bera Maduwa - where drummers used to perform during offerings. Everywhere you can find stunning artworks, carvings, and crafts. Dwarf figures of Vamana Rupa carved on rocks and three-sided twin pillars are other significant attractions here.

According to a stone inscription that has been carved into the walls of the temple, the Gadaladeniya temple is believed to have been built by King Buwanekabaghu the fourth in 1344 AD. A south Indian architect, named Ganesvarachchari, designed the temple - Another instance of Indian influence on Sri Lankan architecture! After a period of neglect, the king Viraparakrama Narendrasinha handed over the temple to a Buddhist priest, Velivita Saranankara Thero. And the temple remained with them as a shrine ever since.

How To Get To Gadaladeniya Temple

The Gadaladeniya temple is situated very close to Pilamathilawa town, around 12 Kilometers away from Kandy on the Colombo-Kandy main road. For easier access, better you have your own vehicle. Otherwise, you can get a bus from near the clock tower in Kandy city center. Remember you need to get off at Gadaladeniya junction. The bus fare is usually around 30 rupees. From the stop, a one-kilometer walk down the streets of Gadaladeniya road shall get you to the Gadaladeniya temple which is only open during the daytime. The entry fee shall be 300 Sri Lankan rupees.