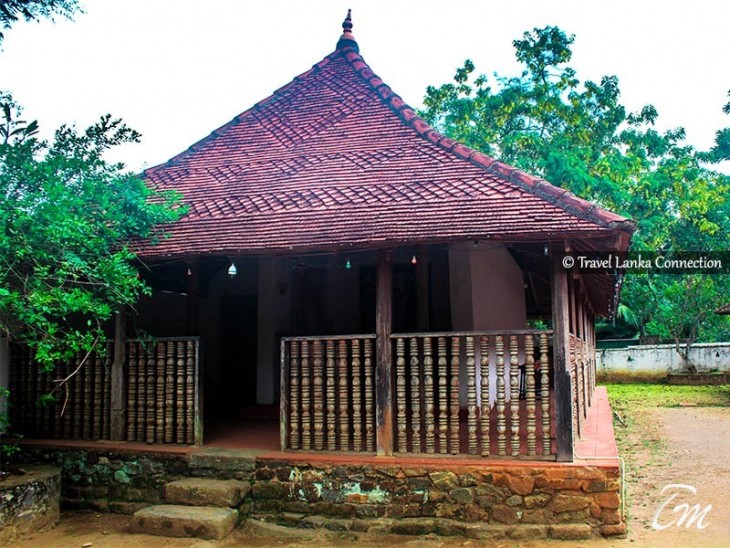 The temple of wood carvings! Located in the Udu Nuwara area of the Kandy district, Embekka Devalaya is a time-old shrine dedicated to a deity, Kataragama Deviyo, built in between 1357 to 1374 AD. With a rich history of over six centuries, the temple is filled with woodworks and carvings. The ancient artistic excellence portrayed on wood at the temple has been recognized by UNESCO as some of the best-detailed works from the history. If you are visiting Kandy, the hill capital of Sri Lanka, Embekka Devalaya should be on your watch-list.

A walk beside the pillars and walls of Embekka Devalaya shall be a memorable experience of exploring the artistic brilliance of ancient Sri Lanka. Maha Devalaya, the main temple, itself features two sections. The "Wedasitina Maligaya" is where the deity, the wooden image, resides. The other section has two halls, namely, 'Digge' (Dancing Hall) and the 'Hevisi Mandapaya' (Drummers Hall). The Drummers Hall is home to splendid wood carvings furnished on its ornate pillars and high-pitched roof. Vahalkada as well, the entrance porch of the temple, embodies the elegance of Sinhalese art. A little walk away, there are some ruins of stone pillars with identical art and design.

Embekka Devalaya is believed to have been built during the Gampola Era, between 1357 – 1374 AD, by King Vikramabahu III. The shrine offers worship to Mahasen, also known as “Katharagama Deviyo”. A local deity, Devatha Bandara is also It is also where local deity Devatha Bandara is also worshipped by devotees. According to legends, the spouse of King Vikramabahu III had a strange dream in which the god ordered them to put up a shrine for him. Upon finding that one of the drummers has also had the same dream, they were intending to build this temple which was originally a three-story building.

How To Get To Embekka Devalaya, Kandy

Embekka Devalaya is located in Medapalata Korale of Udunuwara in Kandy district. If you are approaching from Colombo, you can take Colombo - Kandy main road. At Pilimathalawa, around 12 Kilometers prior to reaching Kandy, you can find a signpost indicating the route to the Embekka Temple, take a right! At Gadaladeniya Junction, you can either turn left and go straight to the temple. Or take a right and at Kahambe Junction, turn left. It shall be around 7-8 Kilometers from Pilimathalawa to the temple.

Among these masterpieces, the most notable carvings and drawings shall be double-headed eagles, the entwined swans, entwined rope designs, a soldier fighting on horseback, breast-feeding image, wrestlers, female dancers, women emanating from a vein, elephant-bull hybrid, bird-human hybrid, elephant-lion hybrid and etc. The total carvings of the entire devalaya, considering all three sections, include 30 decorative patterns and roof designs, 256 liyawela type designs, 125 series of decorations, and 64 lotus designs -That is 514 unique designs in total.