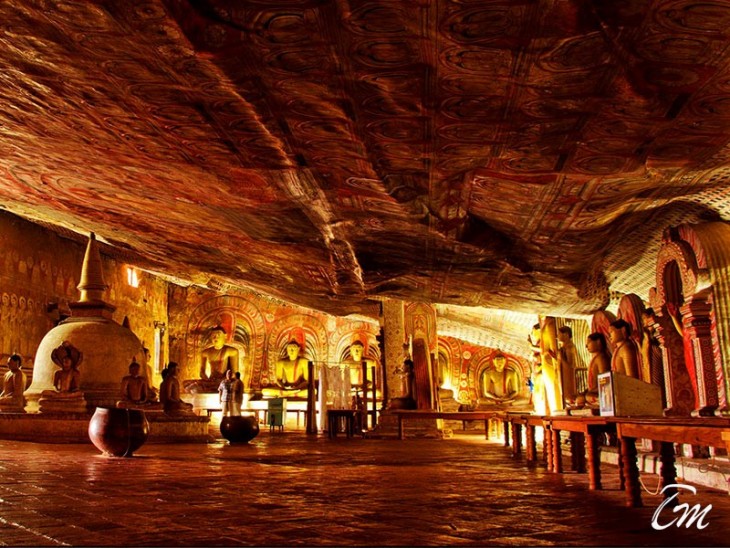 Dambulla Golden Rock Temple, also known as the Dambulla Cave Temple, is an ancient temple region situated in the central part of Sri Lanka, where plenty of time-old caves, rock temples, statues, paintings, and murals are the main attractions for the guests. Listed in UNESCO World Heritage list, Dambulla Cave Temples spreads over acres of land, which is still functional very well and one of the best-preserved historic edifices in Sri Lanka. Located 148 kilometers east of Colombo city, this is the largest cave temple complex in the country.

Being the largest cave temple group, Dambulla Cave Temple features a wide range of historical and religious remnants from the 2nd century BC. The rocks here towers 160 meters over the neighboring plains. Stretching over five acres, there are around 80 documented caves, 153 Buddha statues, 4 statues of gods, 3 statues of kings of Sri Lanka, murals that cover 2100 square meter area and paintings. You would be amazed at its five hidden caves under a huge suspended rock. Inside the cave, the walls and ceiling are painted with strange patterns of religious images.

The Dambulla Cave Temple region is supposed to have been occupied by prehistoric people in Sri Lanka even before the advent of Buddhism in the country. The excavated entities and the burial sites at Ibbankatuwa near these caves around there lend strong credence to the fact that they date thousands of years back to 2nd century BC. The region is believed to have been converted into a temple by king Valagamba of Anuradhapura who sought refuge here. The temple was developed by at many points over time by various kings and In 1938, there had been some renovation works inside the caves.

Since you need some climbing and walking to reach the top of the rock, it is better to know the best season of the year to visit Dambulla, where this cave temple is located. Dambulla has a consistent climate with an average temperature range of 30 °C to 34 °C. The region gets less rain and pleasant atmosphere in the months from January through May, the summer season. Otherwise, you shall be wet. The temple is open from 7 am to 7 pm and the ticket is sold till 5 pm. In order to avoid crowds, visit in the early morning or in the evening. Carry an umbrella with you.

How To Reach Dambulla Cave Temple?

Dambulla Cave Temple is located in the city of Dambulla, one of the notable regions in the central province of Sri Lanka. Dambulla, as a center, is positioned 160 kilometers away from Colombo, 73 km from Kandy and 105 km from Trincomalee. And this central region is reached by all train, bus, and taxi from all the main cities of the country. The cave temple is just two kilometers away from the heart of the city; you can hire a tuk-tuk to reach. The main attractions are situated at the peak of rocks and you need to climb some stairs up.