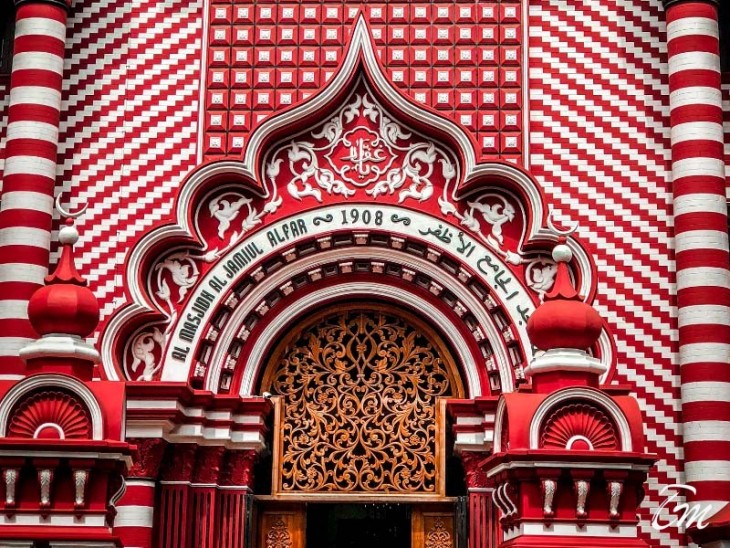 Colombo Red Mosque, also known as Jami Ul-Alfar Masjid, is literally an architectural wonder for the world that would stun you with its unusual color patterns and unconventional yet amazing design. Located in Pettah district, this oldest mosque towers over the buildings and streets in the neighborhood with its tall minarets and had been once a reliable landmark for the sailors coming towards Colombo port. Here both men and women are granted access, but you have to be clad in decent clothes and cover your head and respect the customs. The unconventional red tone has won the name,' red mosque', for this beauty.

Whether done by a qualified or unqualified constructor, its strange architecture, quite untypical of normal Muslim mosques, is what put Colombo Red Mosque in the lame light. Deviating from normal onion-shaped domes, the mosque presents pomegranate-look-liking ones with hybrid structure. This religious edifice, made with Indi-Saracenic architecture, has Persian touch in many places, like minarets. When combined with even-stranger color patterns of red and white in swirling form, this oldest mosque of Colombo is literally being an interesting tourist destination.

Colombo had always been a welcoming hub for international trade where Arabs frequented and populated enormously. They had to perform their five-times compulsory daily rituals. For that reason, the Indian Muslim Community was commissioned to put up a mosque in Pettah. Works commenced in 1908, the construction of the Colombo Red Mosque (Jami-Ul-Alfar Mosque) was finished in just a year. Habibu Labbe Saibu Labbe was the chief designer of the building who relied on Indo-Saracenic and Neo-classical architectural styles. In 1975, the Mosque's capacity was extended as much as 10,000.

How To Reach Colombo Red Mosque

Jami-Ul-Alfar Mosque is located in a busy town called Pettah which is less than 4 kilometers away from the heart of Colombo city. The mosque can be easily reached by both bus and tuk-tuk. If you are taking the bus, you need to get off at Petta Central Bus Station and after getting down take an 800-meters walk down the 2nd Cross Street. If you are getting into a tuk-tuk, they would directly drop you off in front of the mosque. Remember prayer times and Fridays can be too busy to visit.