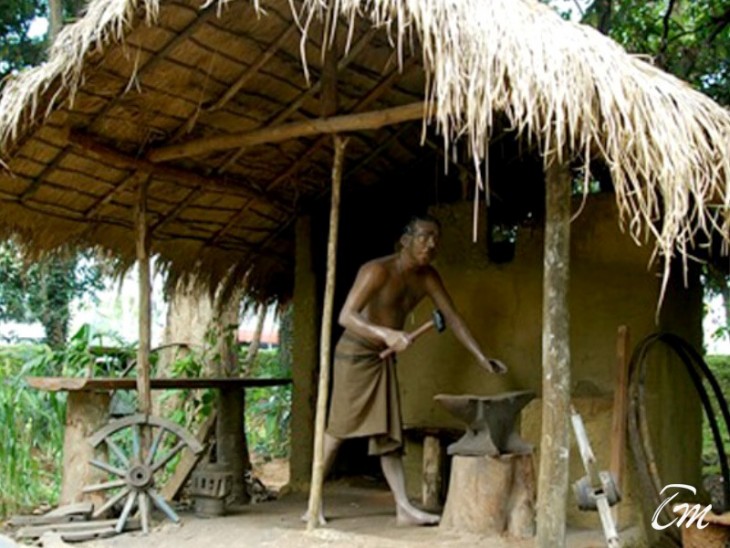 Ape Gama, one of the best tourist spots in Sri Lanka for culture-explorers, is an interesting reproduction of time-old traditional Sri Lankan villages showcasing for the visitors the village lifestyle, traditional art crafts and industries and how ancient societies in Sri Lanka worked in the past. Previously known as “Battaramulla Janakala Kendraya”, a cultural spot for exhibiting local crafts and works, Ape Gama was made into a typical antique cultural village for presenting the historic aspects of Sri Lankan civilization as part of being the venue for Commonwealth Heads of Government Meeting (CHOGM) in 2013.

Ape Gama welcomes visitors to a plethora of fascinating aspects of antique village life and its crafts that stretch over acres of land featuring small huts and houses made of mud and clay separated by wattles and figurines of women and men and animals in different postures. Ape Gama also has a bird-watching area and a mini zoo in its premises. At houses and gardens, the demonstration of inhabitants is recreated for visitors like cooking women, playing children and men at agricultural works.

Ape Gama Village itself is recreating the history of ancient Sri Lanka on its premises. Previously the spot was known as “Battaramulla Janakala Kendraya” being a center for displaying the local crafts of the nation. And it was in 2013, this cultural village assumed the current shape of the grand arena of live-cultural enacting and expo with stalls, huts, and figurines when it was selected as the venue for Commonwealth Heads of Government Meeting.

The best time and season to visit Ape Gama village is the dry season in the Colombo region, between January and March. Except for this season, the region shall get sporadic rains all year long. Comparatively, January, February, and March are cooler with low humidity levels in the atmosphere and get no rain, making it the ideal time for the visitors to roam and enjoy Ape Gama Village. The tourist spot is open the whole week from 9 am to 9 pm.

Things You Enjoy At Ape Gama

Exploring the unadulterated culture of ancient Sri Lankan village living and peeping into the past would be major things the guests would surely enjoy at Ape Gama, a living heritage village museum where rustic houses and handicrafts are on show. Specially appointed locals would be there to explain things and re-enact the history for you, like their normal life, cooking, and agriculture. Also, birdwatching and cycling in this city suburb would be other interesting activities for amusing its visitors.

Shopping Of Articrafts At Ape Gama

There are various stalls and open spaces at Ape Gama where local works, handicrafts and other local-inspired things are on show. All of them are the places for you to purchase things like jewelry, statues, masks and painting fabrics. These are the existence of time-old cottage industries of the nation that stood the test of the time. Outlets of these artisanry products are seen outside the village as well. The services of culinary items include sweets, herbal drinks, and other traditional foods.

How To Reach Ape Gama?

Ape Game Village is just 39 kilometers away from Colombo International Airport and is easily accessible by all bus service, train, and cab. The easiest road to the village from Colombo would be Colombo - Katunayake Expressway E03 that would take you less than one hour on a car. If you are on a bus, Battaramulla, a suburb of the city of Colombo, should be your destination from where the Ape Game village or Janakala Kendraya is easily reached, lying across the lake from Parliament building.