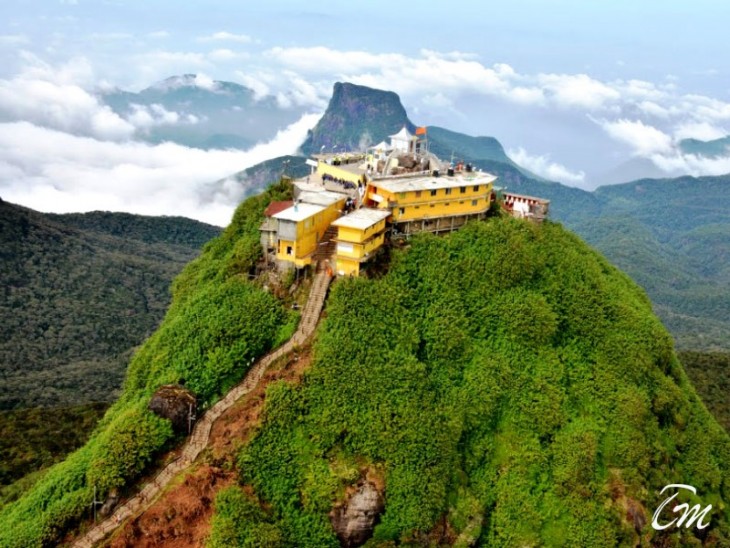 Adam's Peak, one of the must-visit spots in Sri Lanka, is a huge conical mountain towering over with 2,243 meters height in the central highlands of the country, carrying on its top a sacred footprint equally revered by all religions. Besides being a holy tourist destination, Adam's Peak is extremely popular with tourists for its alluring beauty and unmatched trekking. The peak, the seventh tallest peak in Sri Lanka, is also known as Sri Pada (sacred footstep) and Samanala Kanda (butterfly mountain).

What Are The Tourist Attractions in Adam's Peak?

Adam's Peak is mostly seen as a sacred place for all religious groups. On the top, the peak treasures a big rock that carries a huge footprint that is believed to be Lord Buddhas in Buddhist tradition, Sri Rama's in Hindu mythology, and prophet Adam's in Christian and Islamic beliefs. The peak is pretty much attractive with thickly vegetated hills all the way up that facilitates the best trekking experience. Also, the peak is headwaters to four prominent rivers in the country named Kalu, Mahaweli, Kelani and Walawe and various other tributaries and features plenty of waterfalls. Being home to a wide range of unique birds, reptiles, and mammals, Adam's Peak has in possession rich biodiversity consisting of lavish endemic flora.

Adam's Peak, whose history dates back to the pre-Christian era, is special to all religions and expressed in different ways if you ask the locals about the history of this sacred mountain, hence relying on whom you are asking. Buddhists believe that it was the residence of their lord. While Hindus hold that according to their folktale it is in Adam's Peak that Ravana, King of Asura, hid Seetha, the queen of Lord Rama after abducting her from India. Muslims have it that after the forbidden fruit incident from Heaven, Adam directly descended on Adam's Peak. Sun-worshippers are said to have made first offerings here in 140 BC with King Dutugemunu who had given staples to monks at Sri Pada; the karma of which incident is said to have healed him at the deathbed. According to the chronicle of the ancient history of Sri Lanka, the story of Sri Pada has something to do with Queen Varija, daughter-in-law of King Kashyapa. At various points in history, the holy destination had to face setbacks and remain away from public attention.

Simply put the best season to visit Adam's Peak is between January and May when there is less rain in the region and daytime would get pleasant sun all day long. In the southern fringes of the central highlands, where Adam's Peak is situated the safe summer season happens between December and April. During this time, you shall experience a warm atmospheric temperature of 29 Degree Celsius on average with a clear sky. The pilgrimage season in here starts on Duruthu poya day in December or January and lasts until Vesak poya day in May, the busiest time being in April when the school holidays and Sri Lankan new year holidays happen. So it is recommended to make your pilgrim in the early months for calm and relaxed climbing. Many ascend the mountain at nights, to enjoy the daybreak on the top.

Activities You Enjoy At Adam's Peak

Here at Adam's Peak, there is much more to do than a pilgrimage to this 2,243 meters tall mountain. You shall be enjoying scenic valleys, rustic looking environments, lush foliages everywhere your entire way up the mountain. Possibly this one provides you the best trekking and hiking experience up the incline slopes that consist of 5,500 steps in total. You don't need technical hiking equipment to cover the 4 hours of ascent and 2 hours of decent, but a nice pair of shoes or boots and fitness level. If you are ascending at night in the AM, you are getting the golden opportunity to witness the pure outbreak of sunrise, reaching the summit before 7 in the am, where clouds are passing beneath you. The summit area is reserved for the sacred experience of visiting the footprint, Buddhist monasteries and monks.

In pilgrimage season, there would be plenty of tea shops and food stalls showing up regular intervals almost all the way up to the peak where you could sit for a while getting yourselves deep-fried local snacks, chickpeas, Rotis and coffees and teas made of pure tea powders right out from the plantations. Anyway, it would be better keeping your own food with you if you need to take care of a particular diet. Since most people prefer to climb the peak at nights, the nightlife in here would be busier and interesting. All the way up would be lightened with lamps and tube-lights where in the off-season, the way might be dark and only a few food stalls. There are fresh rooms for answering nature's call here and there all the way up. You shall have a selection of restaurants and hotels in Dalhousie with nice accommodation and food.

How To Reach Adam's Peak?

There are two alternative mountain feet for you to start ascending to Adam's Peak; the popular one being from Dalhousie, a small village, otherwise known as Nalathanniya and the other one being from Ratnapura, the opposite base of the mountain, which is less common because of longer hours of ascending. To begin from Dalhousie you first need to arrive at Hatton or Maskeliya, the nearest city, that can be accessed by train or bus from Ella, Kandy, Colombo, etc. Located around 30 kilometers away from Hatton, Dalhousie village can be reached by bus, taxi cars or tuk-tuks both taking around 1 hour going past waterfalls, villages, and tea plantations. Simply put, the three popular routes to the peak from the base are Hatton via Maskeliya (four miles walk), Rathnapura via Carney Estate (10 miles) and Kuruwita (12 miles).